This past Sunday, I, along with my brother-in-law, Steven, and 1200+ other timed runners, raced the inaugural America’s Run 5K, at Cowboys Stadium. In addition to the 1200+ timed runners, there were an untold number of untimed runners participating, making it an extremely large field for the 5K.

Steven and I had talked about him doing the Cowtown 5K back in February, but scheduling conflicts kept that from becoming reality. Instead, he suggested doing the America’s Run, which was promoting it’s finish on the field at Cowboys Stadium. I’d heard about the race, and finishing on the field sounded cool, but the price of the race and having to pay for parking had kept me from signing up. However, once Steven said he wanted to do it, I agreed, and signed up. With the race falling 6 weeks after the Cowtown Half Marathon, it seemed like the perfect opportunity for me to take advantage of a big training base, and go for a new 5K PR. 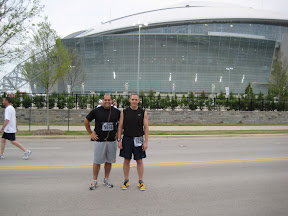 In the week before the race, I felt like my training had fallen off some, and I wasn’t feeling really confident. I was starting to wish that I’d done a 5K two to three weeks after the Half, rather than waiting six weeks; I felt like I’d lost my edge. Fortunately a good final interval workout helped to boost my confidence, and I decided it was time to set my goals for the race: 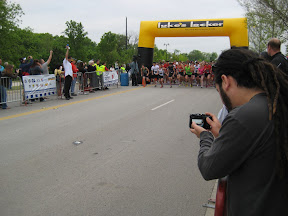 Race day started typically enough, with me waking up a few minutes before my 4:15 AM alarm. I quickly turned off all of my alarms (I set 3), and got going with my pre-race routine. (I like to allow a couple of hours for my body to get ready, before we need to leave.) I had my typical breakfast of toast, with peanut butter and honey, some water, and then showered and got dressed. (Who else showers before a race?) by 5:45 AM, the house was buzzing with activity, with Julie, Steven, and my sister, Tracy, all getting ready to head out. A little after 6:30 AM, we were out the door, and on our way to the race.

Aside from a longer than normal drive for a 5K, we had no problems getting to the race, or parking. I guess when you host a race at a location that is used to handling 100,000+ people for events, a few thousand for a 5K and half marathon is nothing! Once parked, we headed toward the start, which was just outside the south side of Cowboys Stadium. 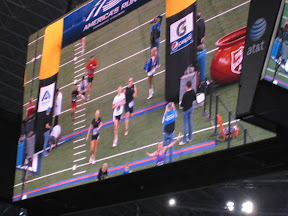 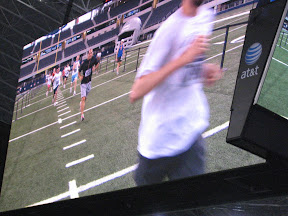 I immediately regretted not moving forward, but I made the best of it, and quickly picked my way through the crowd of “fun runners,” taking care not to weave too much. By the 1/4 mile mark, I was finally getting clear of most of the traffic. In order to hit my “B” goal, I planned on running an evenly paced race of 7:45/mile, which would allow me to kick at the end to get under 24:00. By the half mile mark, I had settled into my target pace, and after a half-mile uphill from Cowboys Stadium past the Ballpark, I finally hit the 1 mile marker in a time of 7:46. Taking advantage of a downhill for the next little while, I increased my pace slightly, and eased past large groups of runners, going through mile 2 in 7:35. At this point I was starting to feel the burn, but knew that with just 1.1 miles to go, I could hold on to my pace. I continued to pass folks, and took advantage of the downhill return to Cowboys Stadium to pick up the pace a little more, and hit the 3 mile mark in 7:26. It was at the 3 mile mark where the fun really began. We heading down into the stadium to field level, and then onto the field, where we had a straightaway finish on the 50-yard line. Once I saw the finish, and hit the turf, I was off like someone had fired my afterburners—it was an awesome feeling! I crossed the finish line with a new PR of 23:34.

After the finish, I grabbed some water, my medal (yes, a medal for the 5K), and souvenir towel, and hung out on the field waiting for Steven to finish. I didn’t have to wait long, as Steven exceeded his goal by over 3 minutes, coming across in 26:56, for an excellent time in his first non-fun run 5K. 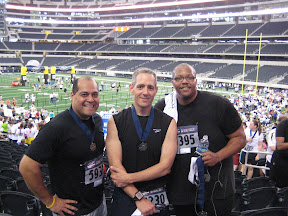 Steven and I made our way into the stands, where we hung out with Julie and Tracy. We cheered on the other 5K finishers, including Chris from @journeytv, and awaited the arrival of the half marathon finishers, including Troy Aikman. All in all, I thought this event was very well run, especially for a first-time event; Steven and I are already making plans to run it again next year, as are Julie and Tracy.